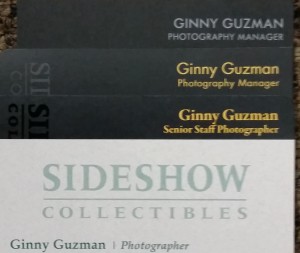 Let’s talk about some serious stuff. I’ve been working at Sideshow Collectibles for 10 years. I spent my anniversary laid up in bed, because of my fracture. It was the start of the new year, and I had a lot to think about. I went from humble photographer to photography studio manager. I managed the department, published 3 books, and acquired a staff. I had started to question what next? Where do I go from here? I had some ideas about what I wanted. But was really unsure how to get them or if they were even possible still at Sideshow. I went to breakfast with some friends and our conversation was one in which I declared that  “something has to change for me at work in 2015” what I have isn’t enough.

Two days after getting back to work, I met with the CEO. Greg is a great man. A person I have formed a very honest friendship with. He’s a man who gets me and my ideals. While the purpose of the conversation was to catch up, the chat took a change. The conversation went to a place of what’s next, a possible change for me, a potentially scary place. Scary because change, big change is in the works.

So I’m moving departments. Giving up my reign of terror as the Photography Manager and moving up, both figuratively and literally. I start at the bottom of a new ladder, upstairs in the Design Department. A man once my equal is now my boss and I really couldn’t be more pleased. I’m working with some of the best that this industry has to offer with the opportunity to train and learn from them as well. The opportunity that exists for me here is something that I’ve really been wanting, hinting at, asking, sometimes begging to be given a chance. I got it. So I’ll be working as the Design Department Assistant with special duties working in the IP world. I’ve got some big goals I’ve set in front of me.