New hair! I’ve had impressively dark green hair for a while now. But Chase thought I should change it up. He suggested going BRIGHT for the spring/summer season. That idea was one I needed to think over. I have been feeling in a rut visually. As in the default look that I reach to is boring, tired. It’s mostly because at work I needed something that would a. be ok to fuck up b. didn’t cost much, so replacing it was not an issue c. would allow be to jump 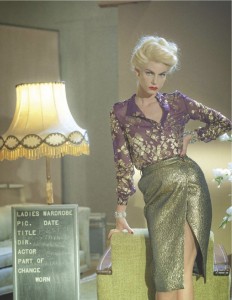 on a table and adjust a light. So needless to say, I became very accustomed to wearing t-shirts and jeans. And my hair kind of went the same way. So I cut bangs, bleached it out and added in a number of neon yellow and green highlights. Let’s admit, it’s the season for change.

As for what’s next: I wrote about how I’ve looking to vamp up my wardrobe as well. Go a little more femme. Won’t be ditching the boots, but adding a number of skirts and blouses. How I’m going to navigate skirts as a woman who’s thighs touch is a whole other issue!  The impending summer heat has me thinking about how to figure out that issue. I’ll also need to dedicate some time in the evening to laying out clothes to wear. Cause I basically get out of bed and grab my pants from where I shed them and go. I think it’s really about just dedicating a little more me time in general. Which I started to do when I broke my ankle. I started with oil cleansing my face and doing a double wash. So washing my face went from one swipe of a wipe to a few minutes of  washing with oil and then a soap.

I’d like to try to go a whole month with not wearing all black all the time. Working in colors to break up the head to toe “goth” look. I’m usually pretty heavy handed when it comes to my color play so this could become a technocolor nightmare. I think I’m ok with that. XX