I grew up on the back of motorcycles as a kid. My father has two beautiful motorcycles; a BMW R90 & Moto Guzzi El Dorado. They are the type of things that when out make grown men skip like school girls as they run over to talk to him about his bikes. But to me they are what gave me the love of the wind whipping my hair around- making it come alive. It also gave me the love for speed.

But the moto world growing up was a boy’s club. A place where I often was the only lady let alone the only kid. I couldn’t help myself. I fell in love with everything that they offered. There was a sense of freedom there too.

A couple years ago I decided I wanted my own bike. So I went out and took my CHP course. No surprise I was the only woman who showed up that day. It was a very funny situation. But I got on the bike , and after stalling it out it slowly crept forward and with that was the uncanny exhilaration that is riding. But it was me. I was doing it. BY MYSELF! My eyes lit up and I was all smiles as I sailed across the parking lot. Zig, our instructor could see that all too familiar face of HOLY SHIT I DID IT beaming out of my helmet. Over the next 48 hours I learned and practiced everything I could. I passed my final test and voila was a licensed rider.

It wasn’t even a week after getting my license I bought a bike. The same bike I have now, a 1981 suzuki gs450. She’s from East LA which I think is appropriate since, my dad is from there too. My first official ride with her was after I got her fixed up with a new tire. The day I had to ride her home a friend drove me over, it was raining in LA which is insanely rare. But perfect because it was her LA christening. I took the long way home that day. Cruising down Hollywood Blvd past my favorite place on the BLVD, it’s where the asphalt goes from regular asphalt to the glittery Hollywood asphalt. It’s the motorcycle equivalent of a red carpet. 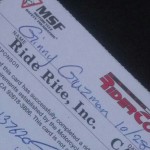 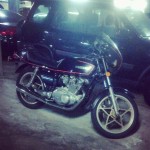 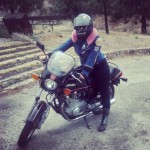